What is an EEG?

An Electroencephalogram (EEG) records the electrical activity of the brain by picking up the electrical signals from the brain cells. These signals are picked up by electrodes attached to the head and are recorded on paper or on a computer. The recording shows how the brain is working.

What does an EEG show? 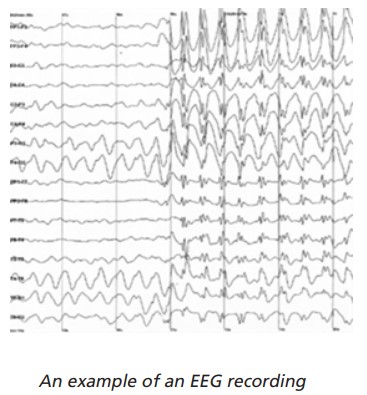 EEG for the CESS Pathway

By looking at which electrodes are stimulated during a seizure can help workout which area of the brain the seizures are coming from. It also shows how a seizure develops and spreads. This is important information when deciding whether surgery is an option or which part of the brain future investigations should be focused.

Video Telemetry is where you will have the EEG electrodes attached to your head and also be filmed. For this to happen, you will need to come into hospital for a period of up to five days - usually on a Monday and discharged on a Friday. You will stay on the ward where a video camera is attached to your bed to capture your seizures. This is so that we can see when you’re having a seizure and from which part of the brain the abnormal epileptic electrical activity is coming from.

An ambulatory EEG works in the same way as a normal EEG but is portable. During the test, you wear a small machine on a belt around your waist. Because it is portable you can move around and carry on with your normal day-to-day routine while the recording happens.

With LTM similar to ambulatory but like with VT you will also have cameras to record any seizures Sometimes this may be chosen instead of VT, If the VT hospital admission would be difficult, but VT is preferred option.