BWC’s Chief Executive Sarah-Jane Marsh has been presented with a brick from the demolished Norton Court building, marking another step towards a brighter future for the Women’s Hospital. 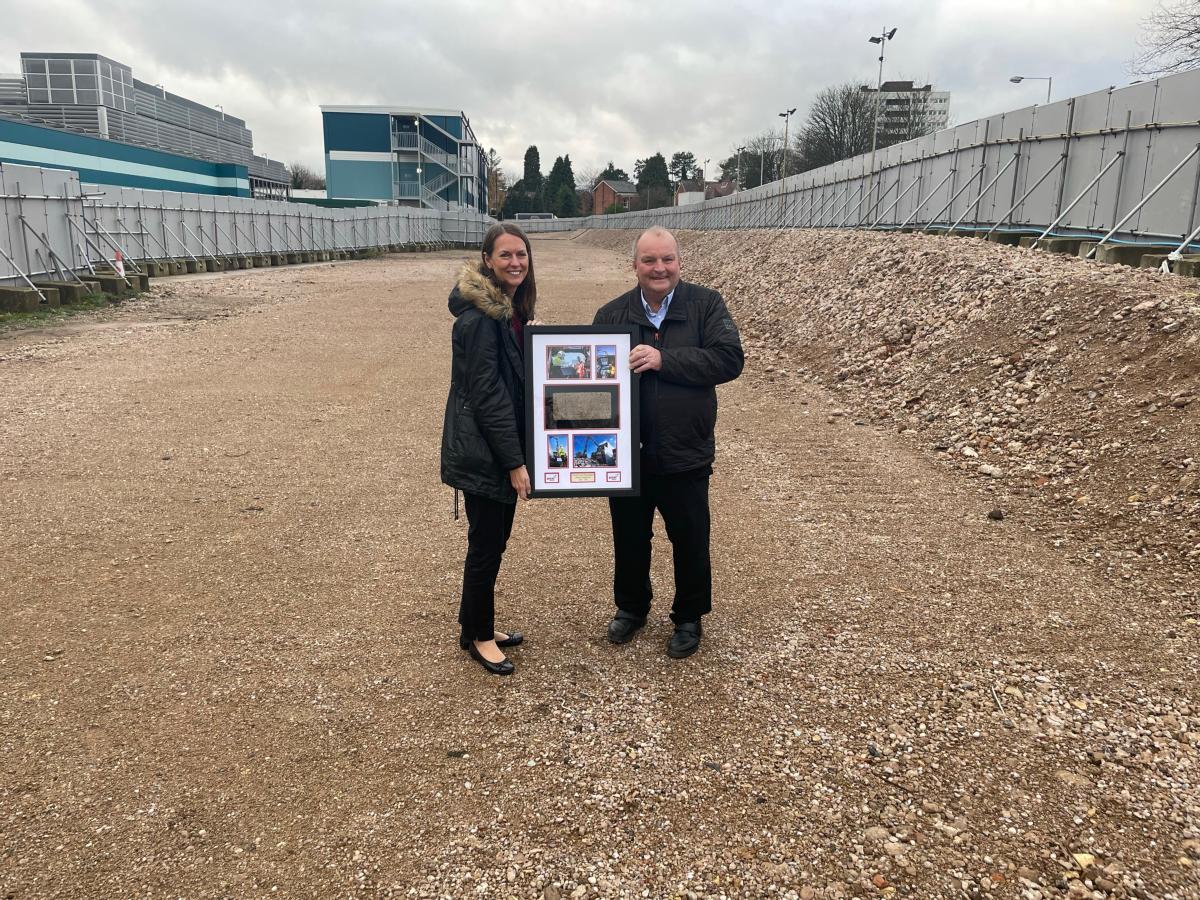 Sarah-Jane, who became CEO in 2017 following the integration of the Women’s and Children’s Hospitals, vowed to demolish the outdated, unsightly block, to make way for more fit-for-purpose, modern health care facilities.

Over the years, it has housed a wide variety of hospital services including accommodation for parents with children in Neonatal care and the Clinical Genetics team, general office space and interview rooms. But as time went on, it was obvious that the building was becoming outdated, too expensive to maintain and couldn’t offer the same environment as other parts of the hospital.

With just 40% of the building occupied by 2019, the remaining staff moved out from Norton Court and into the £3.6million modular block Lavender House and other areas of the hospital, before demolition began in October 2020.

The Trust is currently waiting to hear if its two bids to the Department of Health and Social Care’s (DHSC) New Hospital Programme for funding, have successfully made the next stage. With vital investment needed to upgrade and modernise both the women’s and children’s hospitals, only a handful of trusts nationally will receive funding.

The Big Build ambition for the Women’s Hospital includes brand new inpatient beds for overnight stays, more gynaecology outpatient capacity and the expansion of the Birthing Centre. Improved facilities would also allow for more space and privacy for new parents and newborns, improvements in technology and diagnostics and better facilities for remote and virtual treatment.

Marking the end of the Norton Court demolition, the brick was presented to the Women’s Hospital by demolition partner Armac. Chief Executive Sarah-Jane, said:

“While Norton Court is an integral part of the Women’s Hospital history, it was outdated, impractical and the opposite of what women, men and families expect from a specialist hospital. When I became CEO in 2017, it was clear that the building was failing - not just in terms of modern health care provision but also in providing a suitable working environment for our staff.

“No matter what the future holds, we are now fortunate to have land at both the Women’s and Children’s Hospitals available to build on. The demolition of Norton Court this year marks another positive step forward in our Big Build ambition to provide world-class facilities that our women, children, young people and families truly deserve and that we can be proud of as a Trust, city and region.”

Over 20,000 hours have been spent demolishing eight floors, 11 staircases, four lifts and a total floor area of 16,920m2. From start to finish the demolition took just over 12 months to complete, generating 3,960 tonnes of crushed concrete/brick, with 358 tonnes of mixed metals sent for recycling and approximately 11,000 tonnes of crushed materials retained on site.

“We were really pleased to be able to undertake the demolition of Norton Court alongside our partners Tilbury Douglas Construction and Birmingham Women’s and Children’s NHS Foundation Trust.

“The project has run smoothly and to programme, despite the challenges of working in a live hospital environment during a pandemic, with this achievement only being possible due to the hard work and collaboration of all of the project team.

“It is wonderful for us as a local Birmingham-based business to be a small part in a project that will help so many people in the future. We would also like to pass on our continued thanks, as we did throughout the project on our excavator, to our amazing NHS!”

Mounted alongside photos taken at the start of Norton Court’s demolition, the brick will be displayed at the Women’s Hospital.