An inspirational young man cared for by our Birmingham Children’s Hospital’s expert neuro-oncology team has shared his story this Childhood Cancer Awareness Month as he prepares for his studies at the University of Oxford.

Twenty-year-old Kaleb Ells will be heading to the renowned university to study English Language and Literature after overcoming many obstacles since being diagnosed with brain cancer in the summer of 2015 after falling ill during a school mountain climbing trip in Morocco.

Despite feeling unwell Kaleb, who lives in Birmingham, successfully made it to the summit of Mount Toubkal, the tallest mountain in northern Africa, however just minutes before he was due to board his plane home at Marrakesh’s International Airport, he became extremely unwell, collapsed and fell into a coma.

After being rushed to the nearest hospital a scan revealed he had suffered a brain haemorrhage. Unfortunately, it seemed the high altitude had caused the previously undiagnosed and asymptomatic deep seated brain tumour to bleed.

Kaleb’s parents, Sally and Simon, rushed to be by his side at the city’s Clinique Internationale where their son underwent two emergency neurosurgical procedures to relieve pressure in the head and treat blockage of fluid called hydrocephalus due to the tumour haemorrhage. He remained in a coma in intensive care for three days during what was his 15th birthday.

After receiving treatment and his condition stabilised Kaleb was medically evacuated back home and taken to our Birmingham Children’s Hospital. The flight itself came with its own complications as a shunt, which was draining the blood from the brain, becoming blocked – resulting in Kaleb becoming disorientated and confused.

Once he arrived at specialist paediatric hospital, Kaleb underwent three more brain surgeries during a two-and-a-half-week stay, where he was cared for by the expert team on the dedicated Neurosurgery ward. This included a nine-hour tumour debulking surgical procedure, carried out by a team of neurosurgeons led by Mr Guirish Solanki, which was successful in removing more of the tumour than was originally first thought possible.

Throughout the stay on Ward 10, Kaleb often found himself getting immensely confused and forgetting events from minute to minute and even periodically forgetting who his parents were.

“The kindness and skill of the staff is the most incredible example of human brilliance I have ever encountered.

“From the expert team of neurosurgeons, led by Mr Solanki, to the nurses of Ward 10 who sat up with me all night to ensure my drain was able to efficiently remove blood from my brain; to the Occupational Health Worker and Physio, who boggled at my strange tea-making methods and temporary inability to skip. Without them I wouldn’t be where I am now. I will be forever grateful.”

After a few weeks Kaleb was well enough to return home to continue his recovery returning regularly as an outpatient to the Children’s Hospital.

An important part of his recovery meant he had to sleep for large parts of the day and he continued to experienced difficulties in remembering events.

However, determined as ever, Kaleb planned to return to school to sit his GCSEs and in September 2015, he returned to school part-time committed to sit all of his GCSEs in one-year.

Despite not having the energy to attend school full-time he began to self-teach many of his subjects. With Kaleb only attending school for a few hours each week, the majority of his time was spent at home recovering and studying. Remarkably, less than a year after his brain haemorrhage and tumour diagnosis and treatment, Kaleb, then in Year 11, sat his GCSE exams.

Understandably, as he continued his recovering from such a major life changing incident, Kaleb was hopeful just to achieve a pass in five subjects however, much to his astonishment, he achieved nine A*s, one A and one B.

Again, this remarkable young man yet again shone receiving three A*s in his A-levels; securing himself a place to study English language and literature at the University of Oxford where he will then live. As he got his results he also organised a successful whole-school fundraising event.

Due to working so intensely over the years, Kaleb decided to take a break by having a gap year before attending University.

In late 2019 when attending a check-up MRI scan at the Queen Elizabeth Hospital, where his care had transitioned to as he was over 18. He was told that his tumour had recurred and required further treatment. He underwent proton-beam therapy until earlier this year and is still receiving treatment for his brain tumour and the associated endocrine and ophthalmic effects from the tumour and haemorrhage back in 2015.

Despite the difficult journey Kaleb has had to face at such a young age and all the obstacles he has had to overcome he still has gone above and beyond by volunteering at Birmingham Children’s Hospital, being part of the Young Person Advisory Group; helping to edit and write guides for patients and parents about hospital experiences. He has also given his time for Teenage Cancer Trust and Make-A-Wish on the national youth boards.

Mr Guirish Solanki, Consultant Neurosuregon at the Children’s Hospital, said: “Kaleb is an intrepid young man at heart. For starters, climbing the highest mountain in Africa’s Atlas range, is not for the faint-hearted. At that time, what happened, is the stuff of story tales. His loving parents must have gone through unimaginable angst to treat and retrieve him back home.

“I remember Kaleb as someone too determined to be stopped by his tumour and he put his heart to overcome it. That same inner strength and belief drove him to get his amazing GCSE results and then earn a place in Oxford.

“I can recall the card he sent me, letting me know of his results, the pride of that achievement with a bit of humour for his neurosurgeon as well, happy to share it with me. I am always grateful for his kindness to share that wonderful moment.

“Kaleb’s drive, confidence and strength are a true inspiration to me and reminds me of how powerful the human spirit is every day. His life and achievements will serve to inspire countless other children who face challenges and give the courage to face them and win. I wish him every success in life, he truly deserves every accolade.”

Kaleb, who will head to Oxford University shortly, when asked what advice he would give his younger self, said: “It's ok to find things hard and to acknowledge that difficulty; those difficult emotions are letting you know something. Listen to them, feel them, name them and be kind to yourself.” 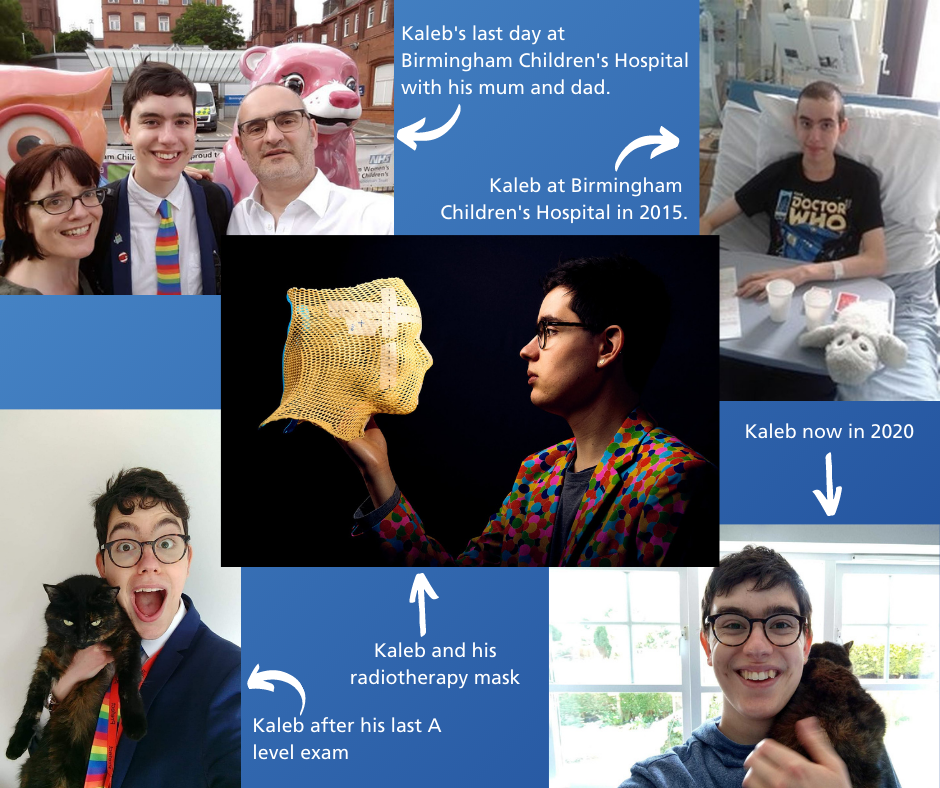