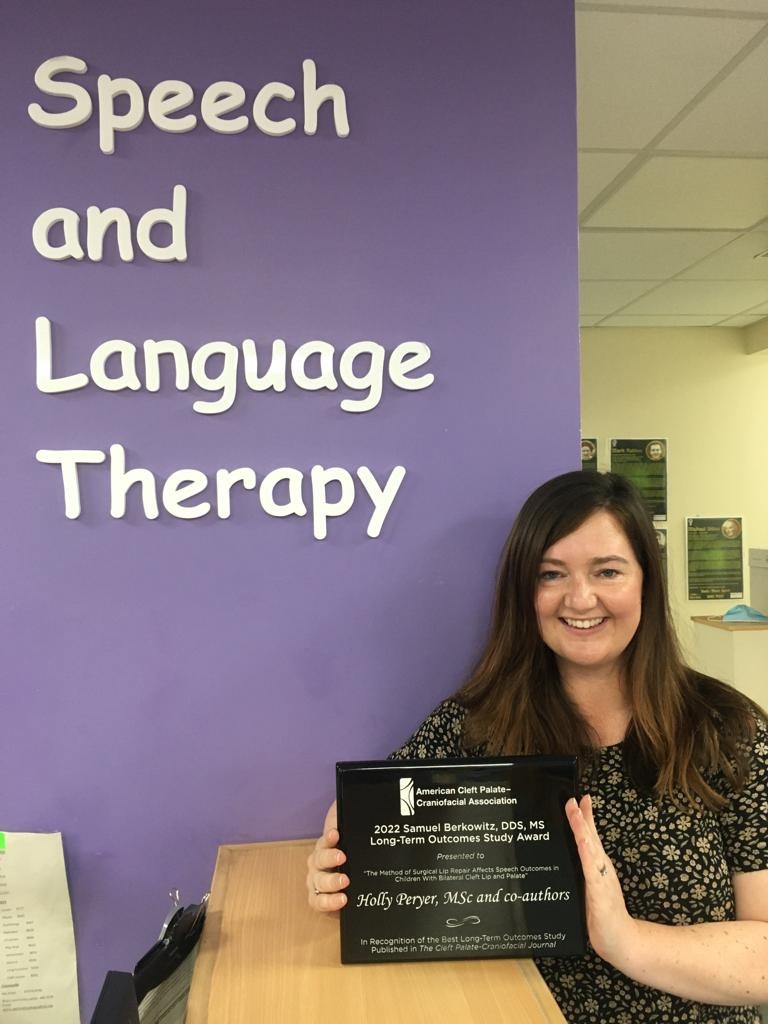 A speech and language therapist from Birmingham Women’s and Children’s Hospitals NHS Foundation Trust (BWC) has been recognised with an international award for research.

The study looked at two different surgical techniques for children with bilateral cleft lip and palate and the impact on speech development.  A cleft of the lip or palate happens when either the tissue that form roof of the mouth (palate), lip or both does not join together completely during pregnancy. This ‘cleft’ requires surgery to repair it in infancy. The cleft lip or palate occurs is 1 in every 700 babies born in the UK.

Holly’s study found that with one surgical technique to repair the cleft lip children struggled pronouncing words with the letters p, b and m, all of which are made using the lips. These ‘lip’ sounds feature highly in many children’s first words. The second technique did not appear to be associated with difficulties in producing these sounds. This study has now informed surgical practice and was published in The Cleft Palate-Craniofacial Journal.

Holly said: “I did the research project as part of my master’s degree. As a team, we worked really hard to get the study published into the journal. We certainly did not realise the journal offered annual awards for papers, so it was a very welcome surprise! I didn’t do this study alone; my colleagues were amazing supporting me through every stage of the process.

“It was a massive surprise when I got the email. It is a real honour, and people in our field have already been in touch to say congratulations. It is an international journal, so we have done really well to be recognised against studies from other countries where there is more time and resource dedicated to research.”

Holly worked on the study with two of BWC’s former surgeons, Miss Rona Slater and Mr Bruce Richard, who helped her complete the written submission during the pandemic, despite already being in retirement.

The award came with $500 (£380) prize which the research group have chosen to use to benefit others. There is £100 donation to a Ukrainian charity, and another £180 will go towards producing ‘sound boxes’, which contain toys to use as part of speech and language therapy to support young children with cleft palate develop their speech.