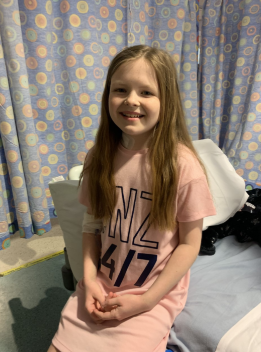 and we are sharing the story of a brave big sister’s three-year battle, against end-stage renal failure. Eleven-year-old Poppy successfully received a new kidney at our Children’s Hospital and we spoke with Poppy’s mom, Jodie, who has kindly shared the family’s story, to raise awareness on organ donation for young people and children.

In February 2018, Poppy was diagnosed with ‘end-stage renal failure, more commonly known as chronic kidney disease, after being repeatedly ill for two weeks. As her condition gradually worsened, Poppy was quickly put onto mechanical ventilation for three days after her kidney had lost its function. Once stable, Poppy was transferred to Ward One at our Children’s Hospital to investigate why her kidney had began to fail - and to assess the damages caused.

The following day, our clinicians on Ward One found that the renal failure was cause by Anti-Neutrophilic Cytoplasmic Autoantibodies (ANCA) positive vasculitis. ANCA positive vasculitis can cause severe damage to major organs and in Poppy’s case, renal vasculitis caused her white blood cells to attack the ‘glomeruli’, which are a tiny network of blood vessels that act as a ‘cleaning unit’ for the kidney. With Poppy’s glomeruli under attack, this meant that our clinicians had to act fast to ‘filter’ Poppy’s kidney to prevent further damage.

After many treatments to bring the vasculitis into remission, Poppy bravely began her treatment of haemodialysis, four times a week at Ward One. Alongside her severe renal illness, Poppy was also managing type-one diabetes, - making this an even greater challenge to combat with her frequent renal treatments. With Poppy’s gradual recovery on Ward One, through six months of haemodialysis, she was able to transition to at-home Peritoneal Dialysis (PD), which involved her parents learning how to safely remove harmful waste from the kidney. This meant that Poppy could return home to her two younger sisters Millie and Georgia at their family home in Coventry - and get back to school, to her favourite classes. 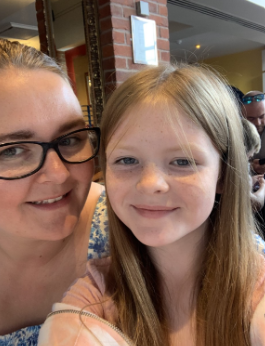 “ It was a very difficult time with poppy being poorly on dialysis, holding her life back. All of the treatments made it hard to manage her diabetes, but we worked hard, and it settled down. Going onto at-home Peritoneal Dialysis (PD) meant that we could be at home together and poppy was able to go back to school every day. Poppy’s favourite subjects at school are drama, geography and English; she’s a very bright young girl”

In 2021 on February 1st, the families’ prayers were answered - after their long and challenging wait on the transplant list. At 5am the family received the call confirming that they had found a generous donor for Poppy. Only eight days following her transplant, Poppy was already showing promising signs of improvement in her blood tests at our Children’s Hospital.

From four days a week on Ward One, to at-home dialysis, to frequent blood tests three times a week,– we’re pleased to say that Poppy now only visits us once every two weeks for her post-transplant blood test. Even though we miss her visits, we’re so happy to hear that Poppy is now on the road to recovery after visiting with us here at the Children’s Hospital.

“I would describe poppy as the bravest, kindest, most beautiful and resilient girl. Poppy has always been an absolute star when it comes to managing her illnesses. She just takes them in her stride and does what she needs to do - she has never let anything stop her. She lives her life to the full, even more so now that she has had her transplant. We owe it to the donor and their family to make every day count with this precious gift she has been given. “

We hear that Poppy has been inspired to become a doctor in medicine when she grows up which we’re thrilled to hear at our Children’s Hospital. We’d like to take a moment to celebrate Poppy’s fantastic progress, bravery and resilience across the last three years.

“Raising awareness on organ donation is integral to support and enhance the quality of life for our kids. Being able to give the gift of life is so important and an incredible generous act that we’re lucky to see happen in our Children’s Hospital – we hope to encourage and raise awareness for the amazing outcomes that can be achieved through organ donation. Poppy was incredibly brave through her journey with us here at our Children’s Hospital and we wish her the best of luck for the future”