Our Neonatal Intensive Care Unit (NICU) at our Women’s Hospital has been by the sides babies and families for decades; offering the world-class pioneering care.

Our Associate Director of Workforce, Surinder Kaur, is one of the thousands of mums who knows, first-hand, about the dedication of our team, who cared for her identical triplets after they were born prematurely at 34 weeks in 1995. Her daughters, Tanny, Gurveena and Raajun, weighed between just 2lbs and 3lbs and needed the support of our NICU team after coming into the world.

They spent the first seven weeks of their lives on the unit, during which time they received help with their breathing. Each day they became that little bit stronger before they were able to return to their family home.

Surinder, who spent 48 hours receiving one to one care at the Women’s Hospital for a spell following the birth, and her babies both continued to receive support from NHS teams over the weeks, month and years that progressed.

Now, a quarter of a century on, all three have been inspired to work in healthcare. Tanny is now a Doctor working in Intensive Treatment Unit (ITU), Gurveena has pursued a career as a Pharmacist and Raajun is a Dentist. All of them also take part in voluntary research studies at King’s College London to support in developing medicine for the future.

Surinder has also been inspired to give something back and, in 2019, raised more than £2,000 for the unit after completing a fundraising half marathon.

She said “I am forever in debt to Birmingham Women’s; they looked after both me and my girls and I cannot thank them enough for that. They truly gave so much care and dedication to us all.

“I remember when I found out that I was pregnant with identical triplets, I couldn’t believe it. I read that you have more chance of winning the lottery. They were my perfect gift. It truly was a life changing experience, I had to definitely become more organised to give 18 feeds a day, to make sure all three nappies were changed and I felt like the washing machine was constantly on and all the days and nights just blended into one.

“Growing up the girls were cared for as outpatients just to make sure that they were growing as they were supposed to. When they started school I remember been asked if I could colour code the girls headbands so they could tell them apart so Gurveena would wear a green one, Raajun would wear red and Tanny an orange for tangerine.

“I was so proud watching them grow and develop; watching them take their first steps, writing their names for the first time, playing tricks on April fool’s day pretending to be each other and then developing into the beautiful women they are today.

“It was definitely a learning curve having the three of them, one birthday they all wrote an invitation list to their birthday party and one of the girls said they didn’t want to invite their sisters, so having to explain that she will always have to share her birthday with them was an interesting one.

“When they all expressed their interest into the healthcare industry my heart could have burst. To know that they are going on to work and give care that could change someone life like what we all received those many years ago.” 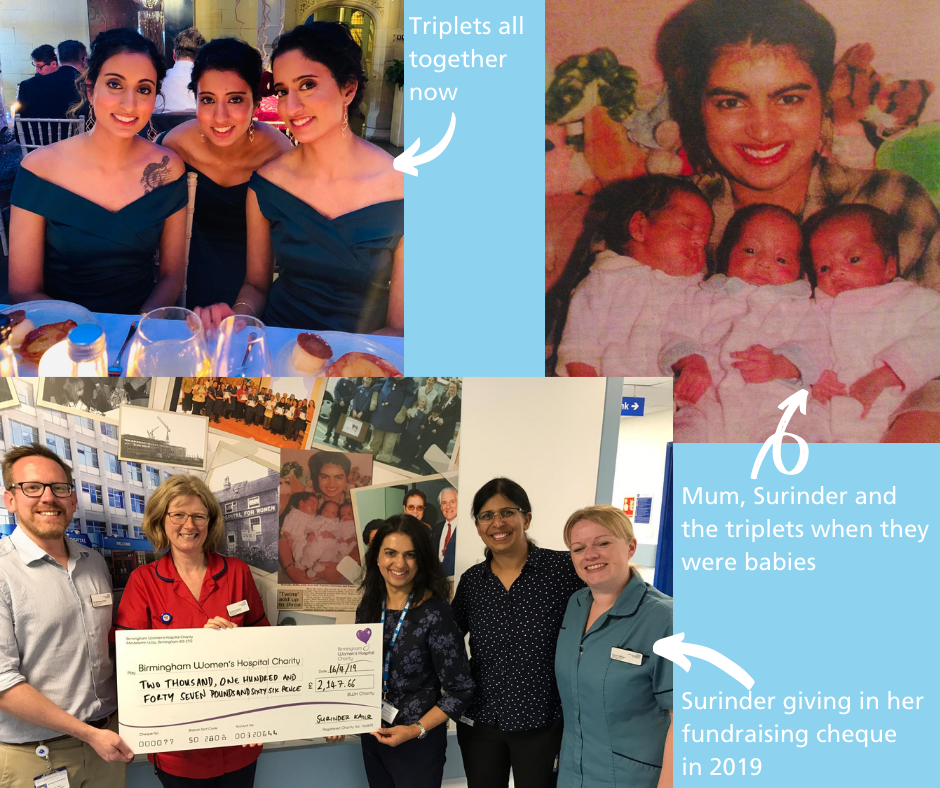