Today (Wednesday 17 November) is World Prematurity day, we would love to share the challenging but inspiration journey of mother of five-month-old twins Grayson and Jenson who gave birth to her boys at our Women’s Hospital.

At 5.05pm on Tuesday 1 June 2021, mum Lindsey welcomed into the world baby number one weighing just 1lb 11oz and at 5.17pm baby number two arrived, so tiny at 1lb 9oz both weighing less than the average bag of sugar. Our nurse Ena was given the honour of naming the twins  from three names provided by mum and dad. Baby one was named Jenson, after the formula one driver because he was always quick to exit the racecourse. Baby two was named Grayson, a name chosen by parents Lindsey and Liam before his birth.

Linsday said: “It all started on the 28 May 2021, when I had my very first midwife appointment - I finally got to hear my boys' heartbeats.” 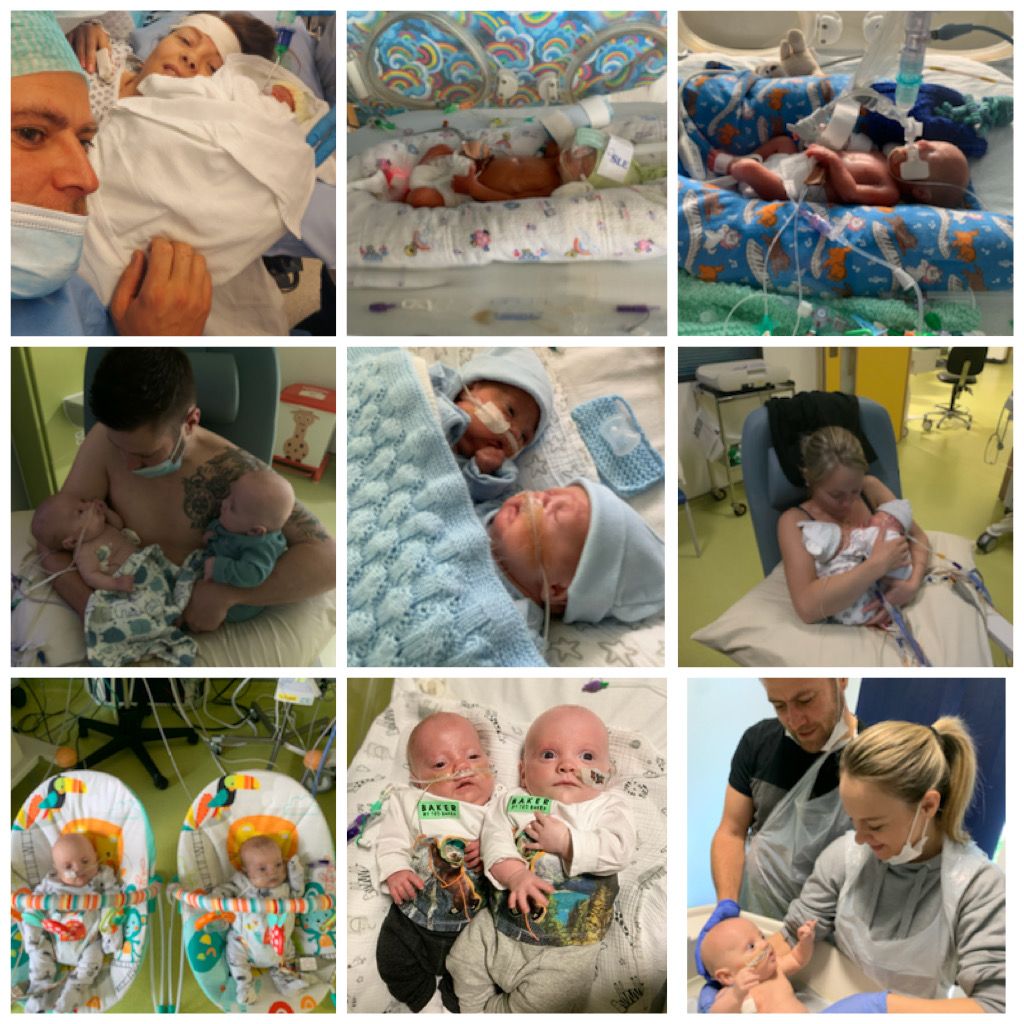 Following this, Lindsey’s midwife asked her if she was feeling ok as they had noticed that her white blood cells had begun appearing in her urine sample. The midwife directed Lindsey to seek assistance if she experienced pain or was frequently needing to use the toilet.

“The next morning, pains started to come. I called my midwife she advised me to go to our local hospital to be checked over. After being checked over I was told I was 3cm dilated and in slow labour. I thought, this can’t be real, I can’t have my babies at 24 weeks and 3 days into my pregnancy, this is dangerous for us all.

“Later that evening around I was transferred to the delivery suite three times back and forth, feeling very anxious about all of this happening to something that was out of my control. I was given lots of medicines for my babies lungs in case I gave birth at this early stage.

“I was taken to the delivery suite for an emergency C-section at around 4pm as the contractions began to worsen. I was introduced to the special angels from the Neonatal Intensive Care Unit at Birmingham Women’s Hospital who would be helping the boys when they were delivered. I also got the chance to meet the professor who supported my operation, he was lovely too.

“After delivery, I only got to have a little look at them before they were rushed off to the special unit where the angels at Neonatal Intensive Care unit would take care of them. I was then taken to recovery where I started to express my milk for the boys, it wasn’t easy as my body wasn’t supposed to at such an early stage in my pregnancy but I managed to get 8ml of breast milk for them, amazing I thought.

“My boys were alive and breathing with lots of support from many machines, so tiny that their eyes were still closed. I thought, this place must be a miracle just like magical chocolate factory, when you see all those fabulous machines working around the clock to make all those fabulous chocolates, we all love. The doctors and nurses are angels sent from above to save tiny premature babies.”

Sadly, Lindsey and Liam were told that the odds of the twins surviving were low due to their prematurity.

“All of the staff were very supportive this is the world no one will ever know about until you’re an ‘NICU parent’.”

Jenson’s and Grayson’s parents were told that baby one, Jenson had a perforation in his bowel – falling critically ill, he was rushed to our Children’s Hospital where his first operation took place. Later that week, they were also told that Grayson had also fallen ill just as his brother had with Necrotising Entero-Colitis (NEC) which had caused his bowels to become inflamed. This is a common issue that can occur with newborn babies and can be fatal to poorly infants. Both operations on the boys were successful and the babies stayed at our Children’s Hospital for six weeks to recover from their illnesses.

Throughout the boys' journey there were a few times where their family thought they may have to say their goodbyes, however each time they were able to pull through and fight for their lives. The Warner family are still fighting, taking each day as it comes. Grayson was discharged on November 9 after his time on the Neonatal Intensive Care Unit and at our Children’s Hospital Paediatric Intensive Care Unit, however Jenson is still fighting, before he can join his brother Grayson at home.

Lindsey shares her message to families going through a similar experience and encourages parents to write about their own experiences to process their emotions.

“There will be times when you feel weak like you can’t face this journey any longer. It’s painful, it’s scary but you have to stand back take a deep breath and see how far we have come. Our babies, being able to live in the Neonatal Intensive Care Unit, makes us lucky as many I’ve seen don’t make it through. Take it step by step, day by day, every minute counts. I have met many amazing friends along my way and through social media. I’m starting to see the light that everyone told me I would see at the start. 24 weeks later I have one baby home,  there is an end. Just hold on tight, cry when you have to, laugh when you can, smile and be the best you can be, be brave.”