Homebirth is a great option for many women but some people worry about giving birth outside of a hospital. Read the stories below to find out about the homebirth experiences of some of our mums and learn more about why it could be a good fit for you.

My name is Natalie and I’m a 29-year-old stay at home mother of three from Highgate, Birmingham. I am a practising Muslim and as well as my newborn I have a four year old daughter and a two and a half year old son.

I decided to have a homebirth because I wanted things to be as natural and intervention free as possible and I wanted to feel comfortable in my own home. I also wanted to be at home with my other children close by.

My first two babies were also homebirths which I had in London but this third birth worried me because I was in a new city and I was unfamiliar with how things worked in Birmingham.

In the last trimester of pregnancy I developed extra amniotic fluid which made me worry instantly. I had to attend the hospital for scans to see if the fluid was increasing and throughout this time the midwives were very sympathetic and explained all the possible outcomes. After they helped me to complete a care plan I felt much less anxious about the situation.

After two weeks of scans and follow up appointments with the consultants the fluid surrounding baby reduced and I was given the all clear to have a homebirth.

The day I went into labour I woke up at around 7am with cramping and a show. I was scheduled to have a sweep at 11am as I was past my due date and from 12.30pm I started feeling small cramps and backaches.

By 2pm the pain was getting stronger and my husband told me he thought I was in labour (I’m always in denial when in labour!).

At 4pm the contractions got stronger and started coming every four minutes so we decided to call the midwife.

When the midwives arrived at 6pm my other children were able to eat dinner in another part of my home with my husband while I was labouring in the front room with my mum and the midwives.

After examining me the midwife gave me gas & air which was a huge help.

At 7.30pm I was still labouring in the front room. It was a lot of fun at this point as the gas & air helped me get through the contractions and I was making jokes with the midwives.

At 8pm the midwives changed over and I remember hearing her say that I was doing brilliantly and she did not think it was going to be long until I delivered.

I had different midwives from this point which I expected from my antenatal appointments. Throughout the whole labour, the midwives were extremely caring, telling me how well I was doing and rubbing my back.

After around 9pm the pain became intense and I could feel the baby moving further down. I felt the urge to push and my waters broke. From that moment it all happened very quickly.

After we got her untangled from the cord I picked her up and put her straight on my chest. I felt so relieved and remember saying “It’s over. I did it!” We had a beautiful baby girl that weighed 7lb 1oz.

After the birth I wanted to delay clamping of the placenta to make sure the baby got everything she needed from it. My husband cut the cord and had his precious skin-to-skin with her underneath his t-shirt while I delivered the placenta.

The midwives left at around 11.30pm and I was tucked up in bed by midnight. My other children were still fast asleep and had no idea that their sister, who we named Suhaylah, had entered the world. It was just the birth I planned and wanted.

The midwives were amazing in every way. They were kind, caring and compassionate but also very professional. I felt the love that they had for their job and it really did show in all areas. They went above and beyond to check in on me and made me feel at ease - especially when I had my doubts, worries and concerns.

My husband was such a great help too, he was able to juggle my needs while looking after our other children and I could not have done it without him.

My daughter Suhaylah is now four weeks old and doing really well. She is starting to smile now which is so cute!

Having a homebirth is such an empowering experience and I would recommend it to every woman and their family.

Abby tells us her homebirth story 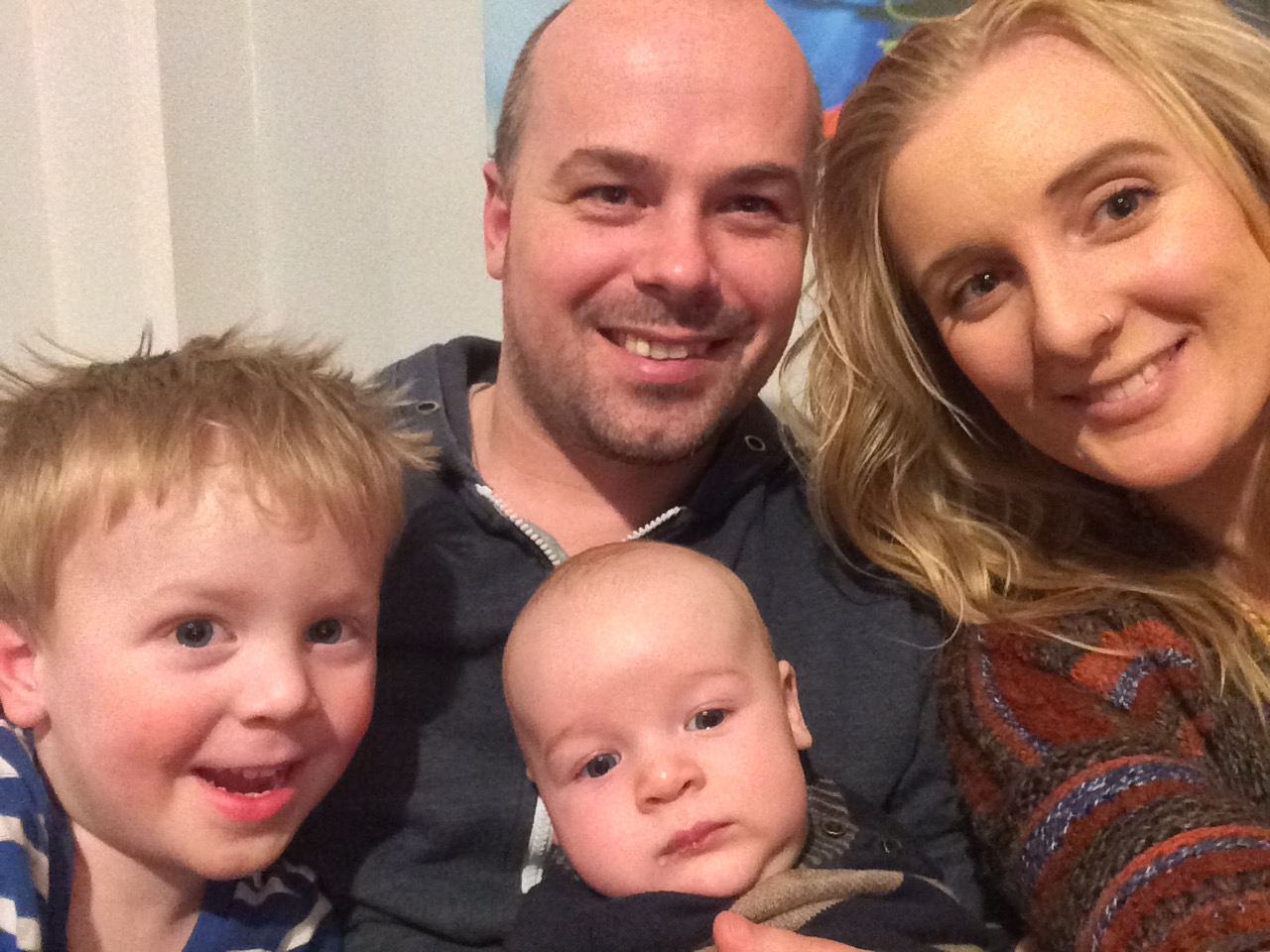 A week after my due date, I was out for a family meal and whilst there, at around 8.30pm, I started having contractions. I’d already had three sweeps, the latest of which had been the afternoon before.

The contractions were at 4 minute intervals so I came home and watched some TV with my husband, sitting on the birthing ball. The contractions increased in intensity and started coming closer together. At 10.30pm I phoned my midwife, Marian, who asked me to keep her informed and call back in half an hour. We called my mum, who lives close by, and she came to collect my 2-year old son as I wanted to concentrate on the labour and not worry about what I’d do if he woke up. While she was here, Marian phoned back to see how we were doing. She told us to get the pool set up and that she was on her way.

Marian arrived at around 11.30pm and set up her things next to where I was labouring – by now I was leaning over a chair, using the TENs machine. She had so much kit! She set up a little resus area and the fact she had everything prepared made me feel very reassured. I felt at ease with Marion straight away – she was warm and kind to both of us. She kept an eye on me and asked me to keep telling her what I was feeling. I wanted gas and air so she phoned for it to be delivered. Meanwhile, my partner Charlie filled up the birthing pool and made sure the room was ready.

The contractions increased in intensity but didn’t get much closer together than about a minute apart. I had a long and very painful contraction and told Marian that I was beginning to struggle with the pain. At that moment the doorbell rang, and the gas and air was delivered – it had taken 15 minutes from phone call to delivery – amazing. Marian said I could now get into the pool, and it was such a relief to be in the warm water – it provided so much support and pain relief.

The intensity increased and I continued to use the gas and air. I didn’t really like it as it made me feel sick and dizzy but it worked to dull the pain a little. By this time Marian had called for Becky, the second midwife, and she had arrived very quickly. Becky used some peppermint oil on a piece of cotton wool, and wafted it under my nose each time after using the gas and air, to help take away the sickness; this was really effective and meant that I could carry on using it for the pain.

I felt the urge to push and the contractions got closer until they were almost continuous. My whole body began to shake and I began to feel quite emotional. I also felt very hot. The urge to push grew until it felt unbearable. The midwives were amazing in coaching me through the urges, encouraging me to change position, and keeping me informed of my progress. Charlie was also amazing – encouraging me, keeping me hydrated and literally holding me up through the contractions.

Eli’s head was at a slightly funny angle and my contractions were short and relentless, which left little breaks to rest and prepare for more pushing. The pushing stage lasted about an hour and a half. The midwives were so supportive and kept on telling me that I could do it. Eli started to crown and Marian suggested I feel his head – this gave me the determination needed to get through the last bit. A few more pushes and he was born into the water.

Eli looked so peaceful. I picked him up, he squealed a little bit and then I just held him in the pool. I was in the pool for a good while – they did the initial checks while we were in there. I was absorbed in Eli and the midwives did what they needed to do without interrupting that precious bonding moment; they were very sensitive in that way. The placenta began to come away naturally so Charlie cut the cord and I got out of the pool. Charlie held Eli while I delivered the placenta. I had to have a few stitches – so I lay on our sofa (which was covered with waterproofing and blankets) while Marian knelt beside me wearing a head torch to do the stitching, and Becky sat on the end of the sofa, on hand to help. They were so careful, I never had any problems or pain from the stitches.

Once Eli was measured, weighed and given his vitamin K, Charlie dressed him while Becky helped me get upstairs for a shower – it was the most wonderful thing to shower in my own shower. Becky and Marian helped pack down the birthing pool and clear up, and after finishing their paperwork, left at around 5.30am. And we sat on the sofa with our lounge back to normal holding our newborn baby!!

Midwives came to see us around midday that day, and a few days after that too. I was given documentation, and several phone numbers to call if I felt I needed anything, and they made it clear that I should call if I had any worries or questions.

During the whole labour the midwives did no internal examinations – they just watched and listened to how I was responding and trusted my body to do its job. This made such a difference to my experience – it wasn’t invasive and I felt like it helped to retain some dignity. I always knew Eli was alright as the midwives monitored his heart regularly.

Nothing takes the pain away from labour but I didn’t at any point feel scared, fearful, out of control, or at risk. I felt empowered and in many ways it was a healing experience from my first son’s labour, which was in a hospital (and quite a traumatic, intrusive experience). I felt like the midwives trusted my body’s ability to give birth which enabled me to the same. They were so kind and respectful, involving Charlie and supporting me.