16 year old May, and her mum Sue, have been through the epilepsy surgery process and wanted to share their experience. 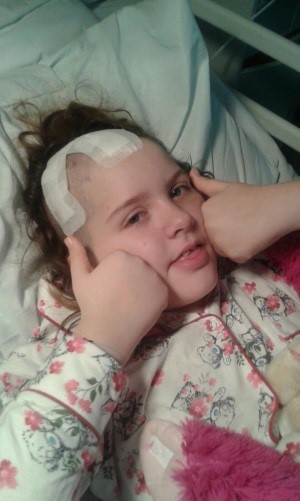 May had her first seizure when she was 2. At first the doctors were unsure if they were seizures but May was referred for further tests when the episodes increased and got more unpredictable. May had EEGs, blood tests and a lumbar puncture at her local hospital to find out what might have been causing her seizures. She was diagnosed with epilepsy and prescribed antiepileptic drugs. May’s seizures then stopped for a year.

However the seizures came back and May was referred to Birmingham Children’s Epilepsy Surgery Service (CESS).

“That’s where the journey really started”

Sue explained. May was prescribed lots of antiepileptic drugs, but the seizures would come and go for weeks/months at a time.

“The medication led to behavioural problems, you couldn’t have a proper conversation with her as she was so tired all time, as though she was in a constant brain fog”.

“Some days there would only be two seizures and other days, up to a 100”

May’s epilepsy had a huge impact on her life; she said

“There were certain freedoms other people could have, that I couldn’t have.”

The assessment process began, including Neuropsychology testing, MRI scans, a PET scan and an MEG scan. May also tried the Ketogenic diet for five months, but this did not help. Sue explained

“You try anything, you give it all a go. We had been pushing for several years to find out more about where May’s seizures were coming from.”

The final step in the assessment was stereo-electroencephalography (SEEG) which is a procedure where neurosurgeons place electrodes in the brain at specific areas in an attempt to identify where seizures start and how they spread, sometimes they are also able to trigger a seizure with an electrode, which can help to confirm where seizures are starting. This was successful in locating May’s seizures and she was now able to proceed to surgery.

“This was the turning point in the process”

May and her family were given good quality information by staff, which helped guide their decisions.

“As a parent, it’s one of the scariest decisions you have to make. You can’t make that without all the facts”

“It was also important to include May's twin sister Anna in the process as it was such a difficult time for her too. Anna was a great support to May at every stage of the process.”

“I hoped for more freedom, I knew I was in great hands in the Children’s Hospital, and they were doing everything they could. It was nice to feel that hope was there.”

After 10 years on this journey, May had epilepsy surgery in January 2018 at the age of 12.

May was admitted to hospital the day before for the preoperative procedures and the family went home and came back early the next morning. Before going into surgery, May was asked

May’s parents included her in all decisions and tried to explain as much as possible. Sue explained

“We talked through everything they were going to do, how long it would take. We were always reinforcing how brilliant the epilepsy surgery team were.”

May was extremely resilient about the surgery and explained

“One moment I felt this terrible stressed out period but then I just thought, you have to be positive when you go in, because then the outcome will be positive.”

“May slept for most of the week after and took a while to talk, she did recover and returned to school after 6 weeks”

explained Sue. Sometimes May feels sensations that a seizure is coming on, although they do not happen.

May came off antiepileptic drugs over 18 months ago. The change in her was obvious to everyone, Sue said

“School noticed her concentration improved significantly, her ability to have a conversation was better and her coordination improved”.

The surgery had a positive impact on the overall family. Sue said

“It’s more than we ever expected, we always thought the seizures would improve either a little, a lot or just ok. We never thought they would just stop”.

“I felt as though I could almost see clearer, before I was so tired and everything was a bit of a blur. Now I wake up, I feel like I can achieve anything.”

Advice for future families going through the process from Sue and May.

“You accept that the path for the future may be slightly different, but at least there will now be a path, whereas before the surgery there was the concern that there would not be.”