How one patient benefited form our RAPID monitoring research project

Why did you decide to take part in the RAPID project? 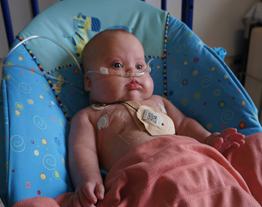 By taking part in the RAPID study, do you feel more or less reassured about your child’s health?

“We probably do read too much into the new monitoring system, but only wondering why it might have changed. We like that we can tell how long she’s been sleeping without the nurses telling us. In that kind of way we feel more involved in knowing what’s going on as parents.”

Do you find yourself asking the nurses questions less or more often with the new monitoring system?

“We’re asking less, but the questions we are asking are more direct ones, about the stats.”

Do you find with the new RAPID monitoring system, the green, amber and red colours used for the graphs are easy for you to interpret?

“When it’s fully green we are happy. If it’s amber or red, we want to know why but are not necessarily worried about it as the research nurses explained that the way the monitoring system works at the moment is all very generic and based on a standard baby, but not one baby is exactly the same. So we tune a little bit of it out but feel more inclined to ask about it. We wouldn’t want to see any red on there though.”

Were you happy with the information given about the study? Or was there too little information?

“We read the information we were given and didn’t have any questions at all. It was all very simple to understand.”

Would you have found it helpful if a parent had spoken to you about their experience in the study when making your decision to take part?

“Yes, that was how we actually got involved. We wondered why other babies had these extra monitors.”

How have you found the general experience of being in the study so far? And, would you recommend it to other families?

“Yes, very positive. We have recommended it to other families. We were just generally talking about stuff and they were asking why we had these other monitors on her. It’s a bit of piece of mind for us, as we can see that she is doing okay and it’s wireless to we don’t have to worry about picking her up and distressing her. It would be miles better to come into hospital and have your child just on wireless monitoring. If it also allows kids to go home sooner, get out of the hospital environment but still be monitored by a professional, it can only be a good thing.”